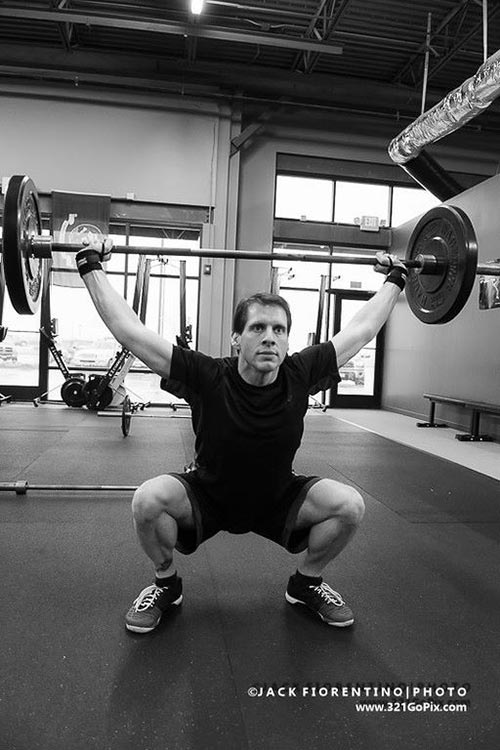 So about 2 years ago I noticed a new business open… Anchor CrossFit. I noticed it funny enough on my way to pick up a pizza. I was curious what this CrossFit thing was because at this point I had given up on fitness. I had tried gyms and home equipment and diets and I will sadly admit to the diet pills. I could keep any of that going for maybe 4 to 6 weeks before I gave up. So at this point I figured I was just fat and there was no changing that and I was a failure so I might well enjoy the food… hence the pizza.

So I googled CrossFit. Now at that point I was up to 265 pounds at 6’1”. I hadn’t lifted anything heavy in a very long time. I had primarily focused on cardio for my gym and home adventures… because that’s how you drop weight right? So looking at videos of CrossFit workouts to me was a bit like watching a horror film. There was no way I could do that. That was just crazy. I went to find all the research to tell me why I couldn’t do that and it was dangerous. I found plenty. I’m curious though so I looked deeper and found that research flawed. Bad gyms with coaches not really qualified for what they were doing. I also found a lot of research about these insane workouts being what someone like me needs. I kind of thought though “No way would these active people want someone like me in their world”.

So a month or so later, I decided to try a free class. I only just managed to finish the warm up and skill part. I did not finish the WOD (workout of the day). I was set to turn around and head out, absolutely mortified because people were asking if I was ok or needed a drink. Then the coaches each talked to me. Actually saw me trying. Both Tony Scott and Jesse Marquez came up to me to discuss how CrossFit works. How they would take me through every movement to make sure I had it right. How I could scale every workout to my ability. I just had to show up and push myself. I figured, what do I have to lose?

The first 4 months of classes were awful… and kind of great. I finished last on most workouts. I could do the movements… but being able to breathe while doing them? Not really. Pull-ups? 2 very thick bands to get through one. Rope climbs were a distant hope. The 45 pound bar felt like it was going to kill me. But I got through. One thing Jesse told me hit me every workout… leave your ego at the door. My ego was pretty much destroyed in just the elements class. It was only trying to get me hurt anyway.

My worst nightmare had come true… here I was working out… probably last one… 2 classes of people watching me and a coach. I’d rather be shot. But every person there wasn’t mocking me. They were encouraging me. And they meant it. There was no sarcasm or pity in their faces. They wanted me to succeed. Every time I doubted myself, one of them would tell me I could do it. And they were right.
After 4 months, it got better. I don’t honestly know when it went from impossible to what impossible thing will I do today while laughing with a great group of people… but it did. First rope climb had me thrilled. First double under workout. First RX workout. I forced myself to start jogging and found I liked it. I found myself talked into signing up for Tough Mudder against my better judgment and enjoyed the hell out of it.

Now 2 years in. I’m down 75 pounds… but more important… I like it. I’m addicted. I look forward to going in and seeing what crazy things we are going to do today. The coaches have expanded and so has the group of people and it still amazes me that you can gather such a diverse group of people together and come out with something amazing.

So anyway to make a long story longer… this is my gym and these are my friends. They have helped me change my life in ways I never thought possible. If you think you can’t… well… trust me on this, you are wrong. You can and there are whole groups of people who will gladly cheer you on and help you do it. Oh and for those that don’t remember… here is my work pic for our office directory… taken shortly before I joined Anchor.

©2020 Anchor CrossFit. All Rights Reserved.
* Results may vary in terms of weight loss

WHERE DO YOU WANT US TO SEND OUR MEMBERSHIP PRICING INFORMATION?